Retro Cool? Or is the Old School look played out.

Yamaha’s 2017 XSR900, maybe the only thing old about it is that it will bring back great memories.

Have you sat on a new XSR900 yet? Anyone who knows bikes will fall in love at first sit. The bike feels light, the controls all fall right at hand, and the best part is it doesn’t look like an Autobot from the Transformers. Don’t take that the wrong way; modern is cool too, but there’s something timeless about round headlights, round instruments, and a shapely rather than hard edged line to the fuel tank. 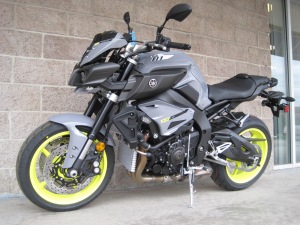 Find a picture of a Yamaha Vision from the early 80s, or any of the other cutting edge bikes of the day. They look pretty dated now, don’t they? And then consider the FZ-10, Yamaha’s new Autobot, I mean, Naked Sport. How do you think the FZ-10 is going to play in 2042, 25 years from now. I bet riders in the future are going to prefer the clean look of the XSR900.

So is it fashionable to ride Retro? You bet it is. A timeless fashion that brings to mind great bikes of the past, and reminds us of great rides we’ve had, too. And not to disrespect the FZ-10, but back to back test rides would probably convince many folks that the XSR900 can hold it’s own in most conditions that we are likely to find, 99% of the time we head out for a fun ride. Come to Vickery Motorsports in Denver and try each of these great machines out, and see if you agree!

We received this very nice letter from a new customer from Golden. Here’s what Walter had to say about his purchase experience with Vickery Motorsports:

We would like to bring to your attention the excellence of two of your employees with whom we had the pleasure of dealing. Having had a number of disappointing encounters with ATV dealerships from Fort Collins to Colorado Springs we had just about decided to buy a used ATV rather than a new one. Our initial contact with Vickery and the demonstrated integrity of your employees was a pleasant change.

Brent in your sales department and Tommy in your parts department demonstrated an exceptional knowledge of your products, were extremely helpful, and easy to work with.

They were major factors in our purchase of an ATV and ATV parts from your dealership and the reason we have and will continue to recommend Vickery to our friends and neighbors who are interested in ATVs and ATV accessories.

The 2013 Ski-Doo Summit SP and Summit X sleds from Vickery Motorsports in Denver Colorado. If you want to buy a new Snowmobile in Denver this season, Vickery is the place to go.

They’ve taken our best selling mountain sled and made it even better! Here’s the short list on some of the more important improvements: 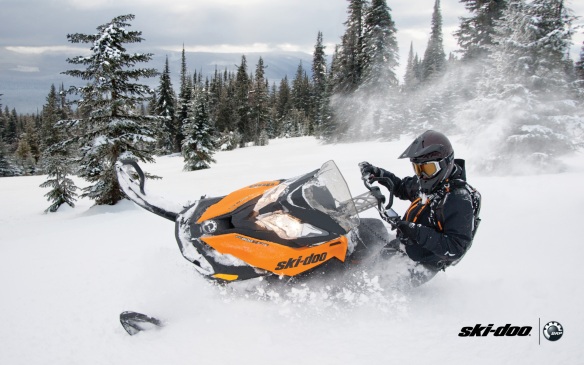 Carve your way UP the slope, with the 2013 Summit SP from Vickery Motorsports in Denver Colorado.

And of course, the 2013 Summit XP 800R retains the enormously powerful Rotax E-Tec engine, with Electronic Fuel Injection and more useable horsepower than any other engine in it’s class. Don’t buy a new snowmobile in Colorado without checking out the new Ski-Doo! Vickery has more Ski-Doo sleds for sale in Denver than anyone!

Did you put off buying a new sled last year due to the poor snow? Well if you did, you don’t want to miss out on the 2013 Ski-Doo. Don’t let another winter pass you by, come in to Vickery Motorsports today and let’s talk about getting you on the snow in style this year! Visit www.vickerymotorsports.com for more info. 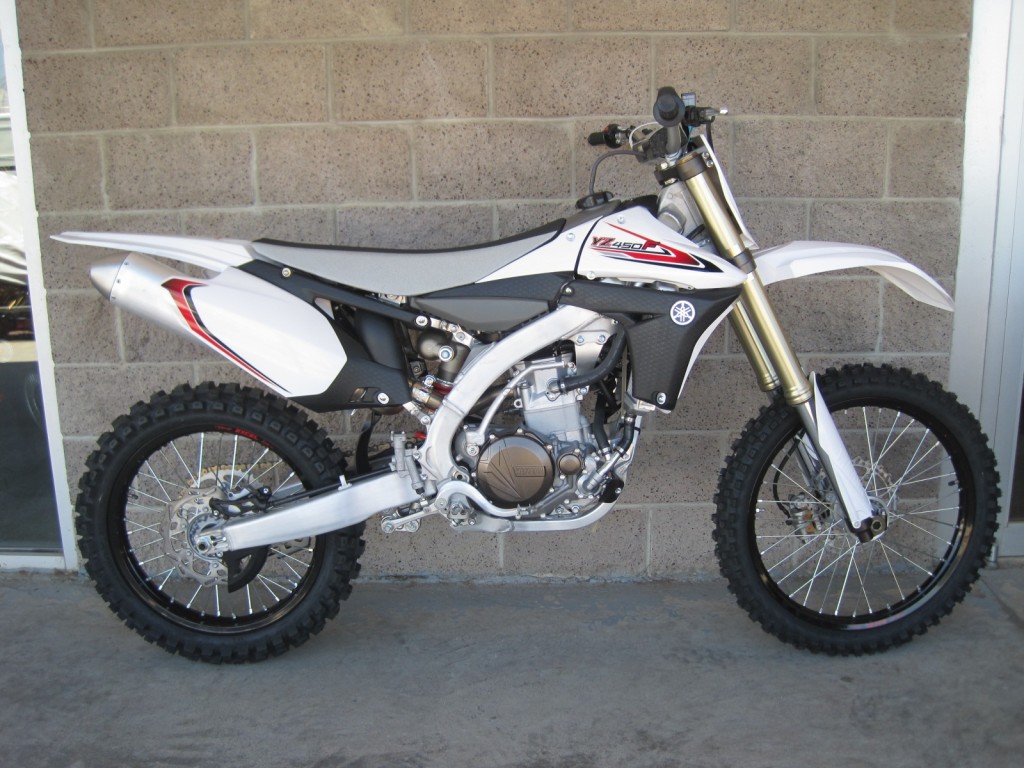 Yamaha’s YZ450F is one of the best Motocross machines ever developed, and one of the big reasons is the adaptable, user adjustable Electronic Fuel Injection.

The 2013 Yamaha YZ450F is one of the most revolutionary motocross machines ever built. From the four titanium valve top end to the unique rearward facing exhaust setup, the YZ450F’s entire layout shows it’s total dedication to performance. But one of the prime features of the bike isn’t even a part of the motorcycle at all, it’s the Accessory GYTR® Power Tuner, that lets tuners adjust air/fuel mixture and ignition timing maps to match engine performance characteristics to the rider and track conditions. Loads of bikes have electronic fuel injection, but Only Yamaha makes it so easy to tune.

GYTR® Power Tuner is an easy plug-in fuel-injection and ignition tuning tool that allows riders to quickly adjust both the fuel and ignition maps to suit riding conditions and rider preference. It allows 9 easy-to-program adjustment points for both the fuel and ignition maps. The Power Tuner’s Monitor function allows the user to monitor the data from various sensors on the bike as well as adjust idle timing, see engine running time, and access the self-diagnosis function.

The Power Tuner is powered by two AA batteries, thus no laptop is required, and no time consuming downloads are necessary. Also important, the unit does not have to be plugged into the bike to create maps, so a mechanic can create new maps while the rider is on the track, testing.

The Power Tuner’s compact design can fit in the palm of your hand or a pocket, etc, and the Memory function can save up to 9 custom maps. Suggested Retail on the Power Tuner is just $279, and it is available at Vickery Motorsports on online at http://www.vickerymotorsports.com .

If you buy a YZ450F in Denver, Vickery Motorsports can help you learn how to adjust the EFI. Call us or stop by for more information, or visit www.vickerymotorsports.com . 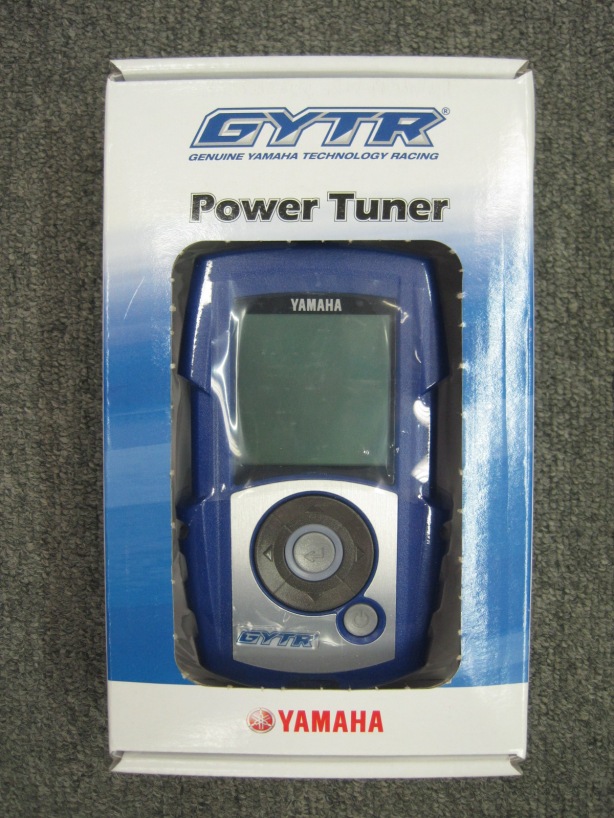 If you buy a 2013 Yamaha YZ450F in Denver, you’ll want to make sure to pick up the GYTR Power Tuner, an essential tool to get the most out of your electronic fuel injection.

It’s easy to say you put the customer first, but at Vickery Motorsports we believe actions speak louder than words. Since 1968, Vickery has been making customer service our first priority.

We received this nice letter in the mail today and we thought it would be good to share.

On behalf of my wife and myself we would like to thank Brent, all the Parts Department employees, and Billy and his service crew for providing excellent service to us. Many times employees such as the ones I mentioned do not get recognition for the hard work and good service because they work behind the scenes. Brent worked many hours to provide a service to me and my wife that was second to none. Brent or any of the other employees never complained, and when we were confronted with some obstacles all they cared about was satisfying the customer. I previously purchased an ATV from a different dealer and I did not receive half the service that I received from Vickery Motorsports. With Brent’s caring commitment and willingness to work with us, we are really satisfied with our purchase of our Polaris RZR. Brent seems to make something out of a negative event (my trailer that did not fit the machine). Brent consistently made extra efforts to assist us in completing this sale.

It’s a pleasure to work with people who know the meaning of efficiency and service!!

Once again, thank you and your employees for making my purchase a pleasant event.

THANK YOU TOM AND SANDRA FOR THIS GREAT REVIEW!

It’s our pleasure to serve you! 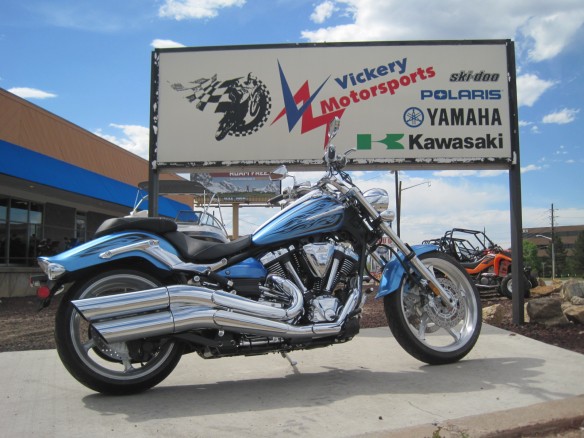 One of the best V-Twin cruisers ever made, the Star Raider is a 1900cc big twin that runs as hot as it looks. Come to Vickery Yamaha in Denver and take a test ride!

Summer is almost here, and there’s no better way to enjoy the great Colorado weather than by riding a new motorcycle! Vickery has seen a surge of interest in all of our V-twins, but most noticeably in our biggest Big Twin, the 113Cu Inch Raider. If you want to buy a Yamaha Raider in Denver, now is the time.

The Raider, and Raider S with extra chrome, are bikes that seem almost custom made for our style of riding. They look great, they’re super comfortable on long rides, and the powerful 8-valve Counterbalanced Twin motor serves up plenty of power for climbing any mountain pass.

The Raiders are fuel injected, too. This means that the injection is always set perfectly for altitude, air density and temperature. Fuel injected motors burn less fuel, make more power, and start much easier. You’ll never want to own a carbureted bike again after riding the Raider with EFI.

The Raider also has one of the best balanced, easiest handling chassis of any cruiser. Many “American Made” Cruisers tend to steer like a dump truck, a problem you won’t experience with a Raider! Take one for a test ride, you’ll see what we mean.

Vickery Motorsports has loads of new Raiders to choose from. Stop by today and check out the full range of colors and options.

The Yamaha Raider is the top of the line V star, and one look will tell you why they are so popular in Denver.

Just a small portion of the great used YZF-R6 Sport Bikes for sale at Vickery Motorsports in Denver. We have R6 models from 2006-2009 for sale now.

Probably the most popular 600cc sport bike in Colorado, the Yamaha YZF-R6, or R6 for short, is one used bike that’s always in demand. Vickery Yamaha has been buying late model pre-owned R6’s all winter, and we have a really good selection for you to choose from.

Since 2006, Yamaha’s YZF-R6 has had more features than any other competitive sport bike. One example is the slipper clutch, something normally found only on larger 1000cc sport bikes.

Yamaha YZF-R6 sport bikes since 2006 have come with a Slipper Clutch, an important feature on the street or track.

A slipper clutch locks up solid when accelerating, just lake a normal clutch, but under deceleration and at high RPM to Load ratios the slipper clutch will slightly disconnect the engine braking force so that the rear wheel won’t skid or lock up. What this means is that if you downshift too aggressively, like accidentally downshifting three times

in a corner where you meant to downshift twice, you won’t run the risk of skidding out the rear end. For fast riding, and more importantly, for SAFE riding, the R6 has the features that riders really want.

With the mid pipe sending the exhaust out underneath the bike, the R6 has by far the cleanest Undertail on the street. 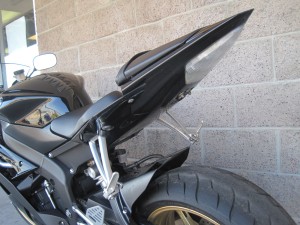 The Yamaha rear section is designed to give street legal bikes the Racer-Only clean look, and frankly, no other brand comes close to the mean little stingers that all R6’s share. What do you think?

Come in to Vickery soon, and pick out your next Sport Bike! 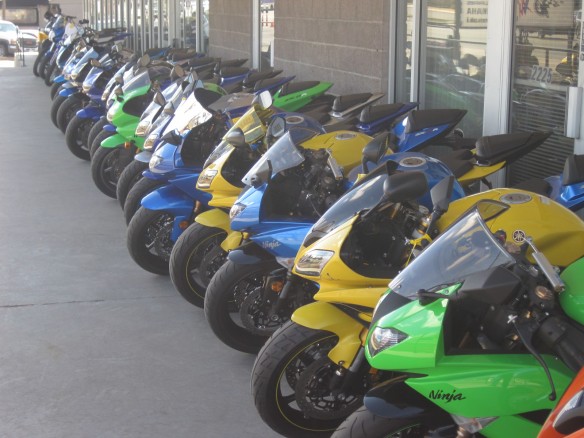 No dealer in Colorado has more clean used sport bikes for sale than Vickery Motorsports.

vickerymotorsports
Create a free website or blog at WordPress.com.